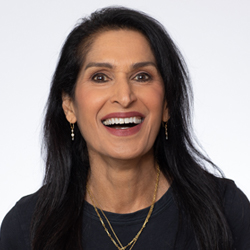 Kiki Kapany is the CEO and Executive Producer at Kikim Media, where all of the productions are guided by our fundamental commitment to fairness and accuracy and by the conviction that a true story, honestly told, can change lives.

She is currently producing Our Beautiful Planet, a series of ten videos about climate change that will air on PBS in 2021. Her most recent productions include Secrets in our DNA (2021), a documentary produced for PBS’ science series NOVA that explores the power of direct-to-consumer DNA testing and the unintended consequences; Look Who’s Driving (2019), a documentary on the future of autonomous vehicles for PBS’s NOVA; and The Ornament of the World (2019), a two-hour animated and live action documentary for PBS about the relationships among Muslims, Jews and Christians in medieval Spain.

Kapany’s additional productions include Silicon Valley: The Untold Story (2018), a three-hour series about the cultural, technological and intellectual history of Silicon Valley for Discovery’s Science Channel, as well as two films based on Michael Pollan’s best-selling books, the Emmy-nominated film In Defense of Food (2015), critically acclaimed at over 20 film festivals around the world, and The Botany of Desire (2009). Kapany has also produced Capturing Grace (2014), a one-hour observational film that documents the intersection between those who live with a movement disorder (Parkinson’s Disease) and those who move for a living; My Father, My Brother and Me (2009), a chronicle of Parkinson’s disease, for FRONTLINE, and Hunting the Hidden Dimension (2008), the story of fractal geometry, for NOVA. She also executive produced Ending AIDS: The Search for a Vaccine (2005), widely praised as a compelling chronicle of one of the world’s greatest biomedical research challenges, as well as the groundbreaking Muhammad: Legacy of a Prophet (2002), honored with a Special Jury Award from Ciné Golden Eagle and a Bronze World Medal from the International Film and Video Festival of New York. Kapany’s other programs for public television include The Next Big Thing?, Stopwatch, Naked to the Bone, and In Search of Law and Order (a three-hour production on alternatives to the juvenile justice system). Kikim Media also produced and directed three short videos for the Gordon and Betty Moore Foundation, a series of 27 short videos about fascinating social entrepreneurs for the Skoll Foundation, a series about diabetes for the University of California, San Francisco Diabetes Center and the Diabetic Youth Foundation, and the special features for HBO’s DVD release of Deadwood.

Each of Kikim’s films come with extensive outreach components to give the film further reach and legs in to communities, with the hope of making some real and palpable change.

Kiki Kapany is a graduate of University of California, Berkeley and a licensed attorney in the State of California. She has practiced law for over 34 years and acted as temporary judge in Marin County, California. Her experienced legal sense, paired with a sound creative approach to production on a worldwide scale, adds a key dimension to Kikim’s resources. She manages all of the entertainment law and day-to-day business required in Kikim’s operations, including overseeing business development, strategic planning, finance and administration. Her expertise extends to the creation and management of major productions, budgets, extensive image research, grant reporting, organizing project deliverables and managing all production and post-production logistics for a wide variety of projects.