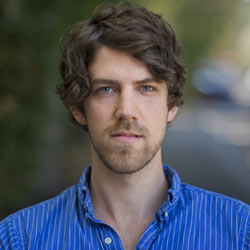 Wes Richardson began working in video production following his graduation from Colby College in 2013.  After working on several television programs for National Geographic and A&E, Wes gravitated to California and became a member of the Kikim family shortly after the national broadcast of their Emmy-nominated film In Defense of Food.  Leading Kikim’s integrated outreach initiative, Wes collaborates with individuals, organizations, and institutions to coordinate community and festival screenings of In Defense of Food.