Each year, farmers must produce a staggering amount of food to meet the demand of a rising global population. Ammonia is a critical ingredient in the fertilizers that enable farmers to grow the enormous amount of food that’s needed to feed the world’s 8 billion people. But the factories that manufacture the ammonia used in fertilizers are a major source of planet-warming carbon dioxide. Will Tarpeh, a chemical engineer at Stanford University, is developing a groundbreaking technology to tap into an unlikely new source of nitrogen for fertilizer: ammonia contained in human waste.

Our partners, The Climate Initiative and the National Science Teaching Association, have created outstanding resources to accompany each of our films. Click on the buttons below to access the lesson plan and community outreach guide for Liquid Gold. The classroom-ready lesson plan developed by the National Science Teaching Association highlights the science and engineering practices scientists use to explain the phenomenon of climate change. The Climate Initiative’s community outreach guide offers talking points and prompts to help foster viewer conversations about the film. 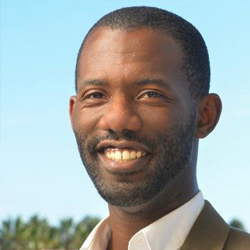 Will Tarpeh is an Assistant Professor in Chemical Engineering at Stanford University. Tarpeh’s research involves reimagining liquid waste streams as resources and enabling more efficient, less costly approaches to reducing harmful discharges to the environment. He is developing novel technologies to capture pollutants in effluent streams so that they may be used as valuable inputs to other processes. For example, municipal wastewater contains resources like energy, water, nutrients, and metals. The Tarpeh Lab develops and evaluates novel approaches to resource recovery from “waste” waters at several synergistic scales: molecular mechanisms of chemical transport and transformation; novel unit processes that increase resource efficiency; and systems-level assessments that identify optimization opportunities. His team employs understandings of electrochemistry, separations, thermodynamics, kinetics, and reactor design to preferentially recover resources from waste. They leverage these molecular-scale insights to increase the sustainability of engineered processes in terms of energy, environmental impact, and cost.

Additional Footage by Courtesy of: